SSC CHSL Tier I Exam was held successfully in March 2018. The final merit of successful Aspirants will be determined on the basis of total score obtained by them in Tier I and Tier II exam. Candidates will be allotted to the various departments for the post of Postal Assistant/Sorting Assistants, Data Entry Operators, Lower Divisional Clerks and Court Clerks on the basis of their merit and preference of post. Tier 1 exam was conducted from 4th March to 26th March 2018. The exam is for 60 Minutes. The subjects of CHSL Tier 1 exams consists of General Intelligence and Reasoning, General Awareness, Quantitative Aptitude and English Comprehension. The four section consists of 25 questions and each section have maximum marks of 50. The total marks for tier 1 exams will be 200. Aspirants who qualified for Tier 1 will move on to tier II exam which will be on 8th July 2018. 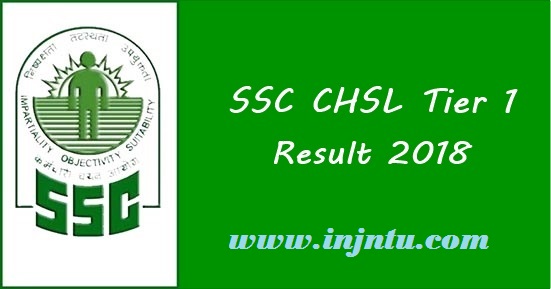 The result of SSC CHSL Tier I will be declared tentatively in May 2018. The result will be published either in PDF format, or you can check by entering hall ticket details in the desired fields. More than 5 million candidates have appeared for the SSC CHSL tier 1 examination 2018. The result will be published region wise. The answer keys of the 2018 SSC CHSL exams will be released one month before the result date. The negative mark for the wrong answers is 0.50. SSC CHSL result 2018 will be declared in three stages, Tier -I, Tier -II and the final result.

IN CASE OF TIE

If more than one candidate score equal aggregates marks, the following rule to break tie will be applied:

Step 1: First, Open the official website of Staff Selection Commission such as www.ssc.nic.in

Step 3: After that, Insert your Registration Number, Roll Number, DOB and Password in a login page.

Step 4: Then Press on “login” button and the SSC CHSL Result will appear on your computer screen.

Step 5: Click on “Save” button and take a printout of SSC CHSL Result for future use.